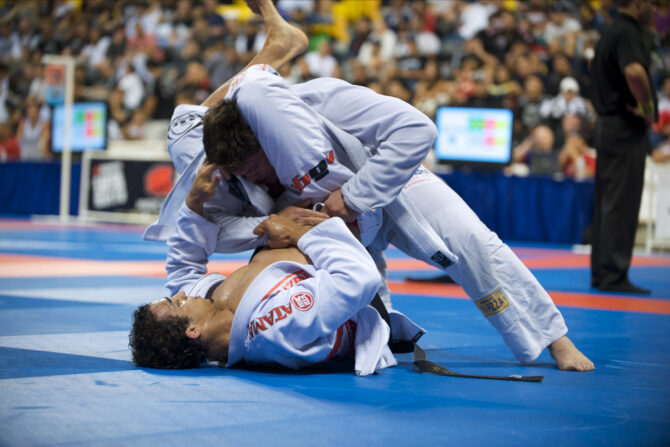 The main differences between BJJ and Japanese jiu jitsu.

Brazilian Jiu Jitsu focuses on grappling.
The fight mainly takes place on the ground. Standing = self defense.
BJJs use strangulation and clamps to submit opponents.
Japanese Jiu Jitsu mainly focuses on throwing opponents.
Joint manipulation, hitting and blocking.
Some styles also include traditional Japanese weapons while training. In BJJ we use takedowns to get opponents to the ground.
Then you work step by step towards a dominant position.
We usually do this in four steps.

Bring your opponent to the ground (if they get too close)

Along the legs (legs are dangerous even for an untrained person)

Check the person by pinning them.

Negotiate, you always have the option for a stranglehold or clamp. 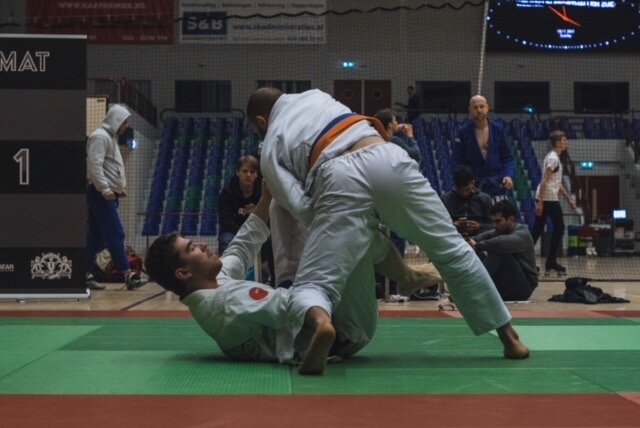 Every year, BJJ has enough competitions worldwide that you can participate in.
The disadvantage of this is that many BJJ schools therefore focus on competitions and points, so that the essence of the sport, being able to defend yourself on the street, is lost.
At Amersfoort BJJ it is therefore mandatory to be competent in both.

The great thing about BJJ is that every lesson you can test your techniques under resistance. So what makes it realistic.
We don’t hit each other during sparring.
To my knowledge BJJ is the only combat sport where you can spar with 100% intensity without hurting each other.
Of course you can get injuries in any sport.
Japanese Jiu Jitsu generally has more styles.
BJJ can usually be divided into self-defense or GI / No Gi.
The style usually depends on your teacher or the philosophy of the BJJ school.
In this video you can see what BJJ spruce looks like at the very highest level.

Japanese Jiu jitsu or Jujutsu targets unarmed opponents.
Own strength and momentum of the opponent are used against them.
Jujitsukas learn how to defend themselves against an attacker.
And take someone out with punches or standing submissions.

Jujutsu also focuses on disarmament techniques.
Modern BJJ focuses mainly on sports.
This largely depends on which BJJ current you follow.
Self-defense is number one at BJJ Amersfoort.
JuJutsu was a self-defense system for the unarmed samurai.
Japanese JiuJitsu is mainly trained in a Kata-like way.
Kata literally means “form”. I therefore call this detailed choreography.
There are modern jiu-jitsu schools that participate in competitions.
They do this at the Ju-Jitsu International Federation (JJIF).
Japanese Jiu jitsu is taught differently at every school.
Traditional schools adhere to the Takenouchi-ryu flow.
Newer schools come under the World Ju-Jitsu Federation (WJJF).

Traditional jiu jitsu is one of the oldest martial arts.
Somewhere between 780AD – 1200AD it started.
In the 13th century it was used by the Samurai to defend themselves against armored opponents.
When losing their weapon, they used Jiu-Jitsu.
Around the 17th century Edo period in Japan, unarmed combat systems such as jujutsu became increasingly popular.
Around this time, grappling started to be known as jujutsu.
At the end of the 19th century, Jigoro Kano adapted JuJutsu and he began to focus on the throws and submissions of jiu jitsu, he called his new style “Kodokan Judo”, and he founded the Kodokan Institute in Tokyo with which he put modern judo on the world map.

The history of c is incomplete without Judo.
Japanese Judokas started to travel the world, some are stranded in Brazil.
One such judokas was Mitsuyo Maeda, a judo master and prize fighter who traveled through Brazil in the 1910s and 1920s challenging other martial arts in “challenge matches.”
Maeda, also known as Conde Koma, eventually crossed paths with Carlos Gracie, who taught Jujitsu.

Carlos opened the world-famous Academia Gracie in the 1920s.
That was the beginning of Brazilian Jiu Jitsu.
Helio, the weakest of the family, gave it his own twist.
The weaker one could survive and win through leverage.

BJJ became world news after the first UFC in 1993.
Hélio’s son Royce Gracie showed the effectiveness of BJJ.
By defeating three opponents from different martial arts.
Boxing, wrestling and savate.
Today BJJ is the foundation of many martial arts.
And the fastest growing self-defense system worldwide.
Read the full history of BJJ in this blog.

Brazilian Jiu Jitsu and Japanese Jiu Jitsu are very different when it comes to rules.
Unlike BJJ, which hosts many competitions around the world every year, Japanese Jiu Jitsu generally does not have a strong sports component apart from some modern forms such as German Ju-Jutsu.

Brazilian Jiu Jitsu matches start standing.
Then they try to push each other to the ground.
However, what you often see is that people quickly sit down for Guard.
Once on the ground, BJJs try to submit (tap) the opponent
Or get dominant positions to get points.
If a BJJer submits the opponent, the game is immediately over.
If there is no submission, the match will be decided on the basis of points.
You get points in BJJ for different positions and techniques, example:
Takedowns – 2 points
Knee on belly -2 points
Sweep- 2 points
Guard pass 3 points
Mount -4 points
Backmount – 4 points

There are plenty of organizations that organize BJJ competitions every year.
The rules are generally similar.
The largest in the GI is the International Brazilian Jiu-Jitsu Federation (IBJJF).
No-Gi it is the ADCC also called the Olympic Games for Grappling.

Traditional Japanese Jiu jitsu has virtually no competitions like BJJ.
There is one organization, the International Federation (JJIF) that organizes this.
JJIF competitions has three events:
Duo.
A few JiuJitsukas perform self-defense techniques that are called randomly by a referee.
They are judged on criteria such as explosion, reality, control and more.
Fight.
This competition is divided into three parts where there is first fought with punches. After that, the Jiujitsukas are only allowed to throw.
When it ends on the ground, the game may only be ended with a strangulation or a clamp. Points are awarded throughout the game.

This is closer to a BJJ competition.
The JiuJitsukas start standing up.
Then they try to push each other to the ground.
The target is a clamp or strangulation.
They also receive points for throws, take downs and dominant positions.
Below are highlights of the 2018 World Championships:

Tire system and progressions for BJJ

Each band that comes below the black band has four stripes that indicate the progressions between the bands.
You can see it as a checklist that you complete so that you can enter the exam for your new band with confidence.
You can get band and strip promotions through your instructor or the organization where you are affiliated.
Each BJJ school has its own policy regarding student progression.
You may have to take exams, spar under high resistance to “earn” your bond. (This is the case at Amersfoort BJJ)
There are instructors who decide for themselves whether the students will bond.
In general, it doesn’t hurt to get a refresh of techniques and take an exam.

There are Jiu-Jitsu schools where beginners wear the red belt for the white belt.

Japanese Jiu Jitsu schools generally have students do kata to move on to the next band.
This is a formality and almost without resistance.
The techniques they need to know depend on the school.

How Long Does It Take To Get Black Belt In Brazilian Jiu Jitsu vs Japanese Jiu Jitsu?

What are the differences in knowledge between a BJJ black belt and a Japanese Jiu Jitsu black belt?

An average BJJ lesson is approximately 1 – 1.5 hours and consists of:

In Brazilian Jiu Jitsu and Japanese Jiu Jitsu, everyone generally wears a Gi or kimono.
A Gi is a cotton jacket and pants, with a cotton band that indicates your rank.
BJJ Gi’s are generally heavier than karate kimonos.
They are available in different colors, weights.
Japanese Jiu Jitsu Gi’s can generally range from lighter karate-style Gi’s to tough judo-style Gi’s, depending on the school.
In BJJ almost everyone wears a mouthguard and toque while rolling.
In Japanese Jiu Jitsu it is recommended to wear a toque.

What is the most effective style?

UFC 1 and today’s UFC provides the answer to that question.

If you are looking for a combat sport that trains realistic and under resistance, BJJ is the choice for you.

If you’re looking for a combat sport that is more traditional, know what to expect each class and be less physically demanding.
Can you consider Japanese Jiu Jitsu.

The choice is yours or come and experience it.

As you have read, BJJ and Japanese Jiu Jitsu have similarities and yet many differences.
When you choose a combat sport, do it based on your goals and preferences.
You are always welcome on the mat of BJJ Amersfoort to try it for free!